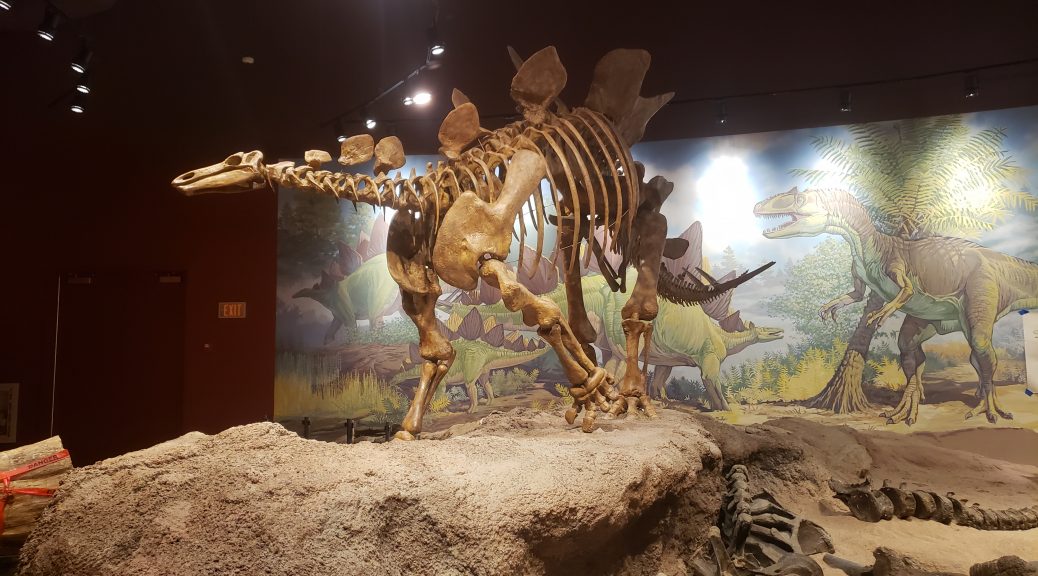 The Jurassic Park movie tagline isn’t quite accurate, since many of the fossils in the area are more like 150 million years old, but it’s a fun movie to think about while here.

My daughter and I stopped at Dinosaur National Monument over twenty years ago, when driving from Yellowstone to Arches, but it was just a quick stop on the way. I did remember visiting the Quarry Exhibit Hall and that fantastic “wall” of fossils. I’m trying to keep my days of driving to 8 hours or less so this seemed like a great stop after Twin Falls. There is quite a lot in the area to see from dinosaur bones to scenic drives to beautiful river gorges.

I had a very comfortable AirBNB for a week. Boo and I had a lot of space but we were on a busy road so it wasn’t great for walks. The Freestone Legacy Walking Park was just 2 miles down the street so we drove there to walk several mornings if we weren’t heading out to other hikes. When driving from Twin Falls, I took US40 through Duchesne and Roosevelt, part of the Dinosaur Diamond National Scenic Byway. I drove more of the byway later during the week, Vernal to Dinosaur, Colorado. Dinosaur National Monument is part of the NPS, and has visitor centers in both Utah and Colorado. I visited the Utah side first, stopping at the Quarry Visitor Center to look at the exhibits and watch the 12 minute video. I went to Quarry Exhibit Hall, still amazing even if you’ve seen it before, and so glad they left these fossils as they found them. Thank you, Earl Douglass, for this great suggestion to leave them for future generations to view. Boo and I drove the Cub Creek Road, stopping at Swelter Shelter to see the petroglyphs first. We went down the Split Mountain road and did the River Trail. Not recommended, I assumed we’d be walking along the river, not halfway up a steep rocky hill on a very narrow path. The Split Mountain area is beautiful, though, just skip this trail. We continued to the end of the road, stopping at the various overlooks and other sites from the “Tour of the Tilted Rocks” guidebook (pick it up at the start of the road for $1). I enjoyed seeing all the petroglyphs (carvings) and pictoglyphs (paintings) along the road, the Turtle Rock, and especially Josie Bassett Morris’ cabin and learning about this quite remarkable woman.

A few days later, I drove over to Dinosaur, Colorado and the Canyon Visitor Center. Boo and I started with the Bull Canyon Rim trail at the Plug Hat picnic area. This trail leaves the monument and is part of BLM lands. A very beautiful walk along the canyon. I drove to the end of the road and did the Harper’s Corner trail. Another gorgeous trail with amazing views. I headed back down the road, with stops at Echo Park, Iron Springs Bench, Island Park, and Canyon Overlooks, then finished our day with the Plug Hat Butte trail. The Utah side of the monument has all the dinosaur bones, but, IMO, the Colorado side has better views and trails. Boo was allowed on both the Bull Canyon Rim and Plug Hat Butte trails but stayed in the car while I walked the 2 mile Harper’s Corner. Fortunately, I was able to because it was only in the mid-60’s and I left the windows down with my mesh “screens” over them. They’ve been very useful for camping and events like this. The Utah Field House of Natural History State Park is a very nice small museum, $7 entry. The large hall has a 90 foot diplodocus to greet visitors. The theater is showing a film, ‘Stories in Stone’, about volunteers and scientists at two local sites. I think doing a volunteer dig would be really interesting, they have an organization for Utah Friends of Paleontology. There are multiple rooms for the Morrison formation, Jurassic Hall through the Eocene Gallery. The room upstairs has Native America artifacts. It is a really entertaining visit and you can walk through the outside dinosaur garden when leaving; it is home to 14 life-size prehistoric animals, including a wooly mammoth covered in hemp hair.

Flaming Gorge Scenic Byway After taking 191 north out of Vernal, I drove west on 44 to the Red Canyon Overlook and did the Sheep Creek Geological Loop, before continuing up 530 into Wyoming then back down 191 along the byway with several stops, including the the Flaming Gorge Dam. I enjoyed the geological signs along the route telling me what era the formation was from with various comments like “ancient seas” or “greatest concentration of fossils found in Utah” or “sea urchins and shark teeth found here”.

I went out to Red Fleet State Park one afternoon to do the dinosaur track. But the start of the hike is about a mile further down 191, then another 2 miles east. It is a mostly well marked trail (there are some spots where I was following footprints. Human footprints, that is, because there weren’t any marked dinosaur ones) out to the lake where you can see 200-million-year-old dilophosaurus tracks.

I had a great week here in northeast Utah, with wandering drives to Wyoming and Colorado. A great place for a short stay. I didn’t try any of the local restaurants, just cooked at my AirBNB.