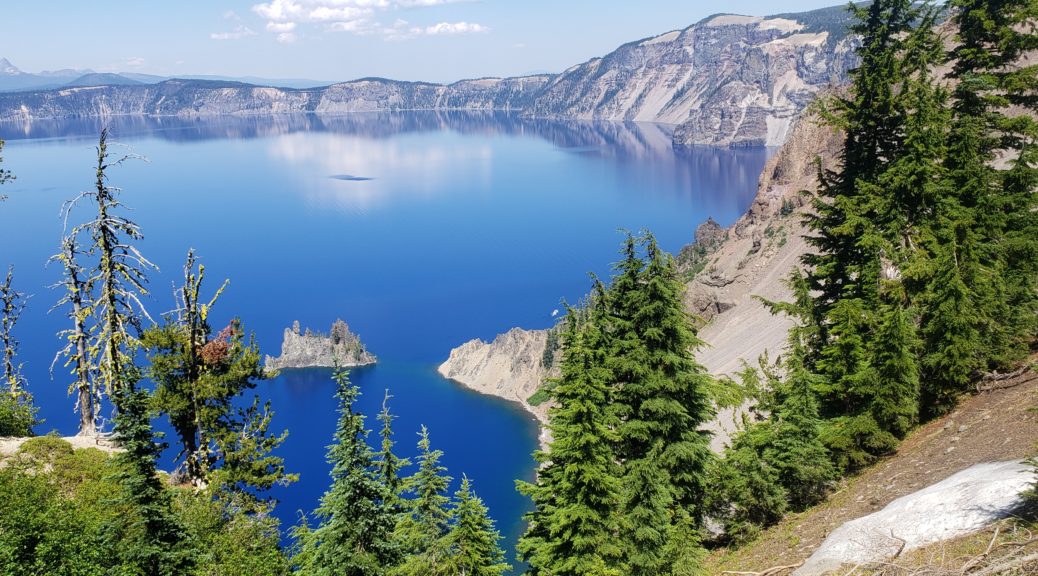 I was here many, many years ago with my parents and sisters. I know that from family pictures but really didn’t remember visiting. I’ve been wanting to return to Crater Lake and Oregon for several years.

I made reservations at Mazama Campground on the park grounds before leaving but unfortunately they were cancelled when I was in route. They are performing hazardous tree removal and it was taking longer than expected.

I found another campground just south of Klamath Falls. The site was nice and I met some friendly neighbors from Florida, Diane and Mike, but the site owner was rude to both of us. I don’t recommend the Crater Lake Resort.

Regardless, it was a nice shady site; but it was 20 miles from the park, so it made for a bit of an extra drive in the morning. I just set up camp the first night and reorganized my belongings. After most of 3 days in the car, Boo was very happy to get out. There is a nice path along the little creek so we walked around for a bit. I picked up some beer from the store onsite, Klamath Basin Brewing, Hazy IPA, and had a few with a sandwich I made for dinner.

After an early night, we got up and drove to the park, stopping at the Steel Visitor Center. Steel is named for an early tourist to the lake who lobbied President Grover Cleveland to make it a park. Cleveland protected the area but Steel wrote over 1000 handwritten letters to Congress to convince them to make it an official National Park. It became a park in 1902 under Teddy Roosevelt. The park rangers talk about how important one person can be and to not underestimate the importance of advocacy and political involvement.

We did the Lady of the Woods walk while at the visitor center. It’s less than an mile, an easy walk and pets are allowed. The trail guide explains the buildings historic architecture and how they integrated them with the natural landscape. When the HQ opened at 9:30 I watched the the park film that explained how the 12000 foot Mount Mazama exploded and the huge magma pool beneath the volcano collapsed to create the lake 7700 years ago. Or rather it created a huge smoking hole of ash that took years to fill in from snow melt. Park Ranger Dave was part of the film and I meet him in person the following day on my boat tour.

We went on to Rim Village and Boo and I walked along the rim for a while for our first good views of the lake. There are lots of superlatives about the lake, and facts like it’s the deepest lake in America, one of the 6 deepest in the world. It has the clearest, cleanest water, brilliant blue. But instead of trying to describe it, I will just upload a lot of photos.

After our walk along the rim I returned Boo to the car so I could do the Discovery Point trail. Two miles along the rim on the south west side of the lake, it has great views of the lake and Wizard Island though a shady forested area.

We continued clockwise around the rim, stopping at every overlook. The rim drive is a 33 mile road with lots of pullouts and overlooks to enjoy the scenery. I did get Boo out at all the overlooks, even if he couldn’t do many of the walks. We stopped wherever we could, did the Cloudcap Overlook, a short drive off the main Rim Road, we did the short Sun Notch trail and stopped at Vidae Falls. From Vidae Falls we did several miles on the Greyback Drive. This is closed to cars but open for hikers, horses and pets. We headed back to our campground after stopping at Mazama Village to look around. I had a great burger that night at TP in Chiloquin and had a few local beers before an early night.

I got to the parking lot early to have a nice shady spot to leave Boo. I used my new window mesh covers and left the windows down for him. You really have to plan ahead when traveling with your pets!

Cleetwood Cove is a very steep 2.2 mile round trip hike, the only authorized path to the lake. They recommended at least 40 minutes to hike down, and I left the car park around 8; it took me about 30 minutes to walk down. I used the time to wander the edge of the lake and dip my toes in the very cold water, before boarding my boat at 9:15. We had Captain Toni and Ranger Dave for our tour. Ranger Dave provided a lot of great, in-depth information about the lake and park. He talked about the geological formations we could see, the depth of the lake, evolutionary changes to some of the animals in the park (for example, there is a snake on Wizard Island that is different than the related snake on the mainland). We sailed around Wizard Island, marveling at the colors of the water, then went to Phantom Ship, and sailed around that twice. Phantom Ship is home to a lot of nesting birds as there are no predators to eat their eggs. We made several more stops for photos and information about specific geological features of the volcano crater before disembarking at 11:30. I had allotted an hour to hike back up the steep path, but even with 8 or 9 stops to pant and catch my breath, I made it up in about 40 minutes. Yeah me. It is very steep and you’ll find yourself on your toes at some parts.

Back at the car, I took Boo for a short walk before heading out of the park.

I was going to go counterclockwise, as it’s shorter than continuing on the Rim Drive, but I hadn’t stopped at Pinnacles the day before and decided to make the trip out there, so continued clockwise to get to the side road off Rim Drive. Pinnacles is about a half mile round trip trail but no pets allowed. Since you can see the formations from the trailhead I just took a few photos and headed back to Lost Creek campground for a picnic lunch.

We stopped at the Castle Crest Trail on the way out of the park. Castle Crest is an easy, half mile trail through a meadow filled with wildflowers and a lovely little creek. Two days seemed like plenty of time to enjoy the park unless you want to do some of the longer, back country hikes. Next stop, Ashland, and I am going to try to get a ticket to one of their Shakespeare shows.