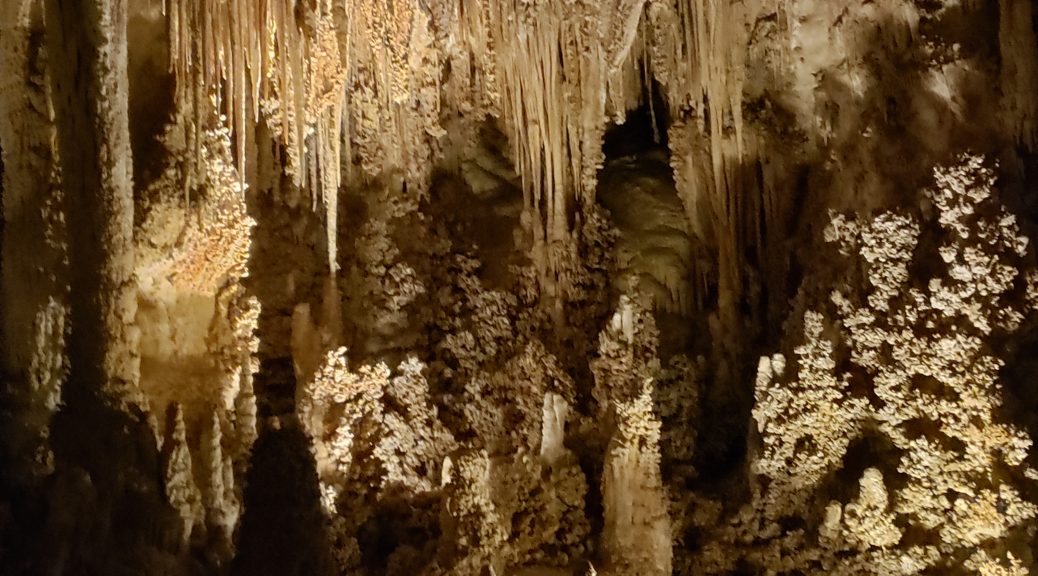 The eighth wonder of the world. Truly amazing. I arrived in Carlsbad and stopped in the caverns on the way to town. I had hoped to get tickets then as well as general park info. I was told tours were fully booked until June 7th, 4 days after I was leaving. Disappointed but I thought I would continue to check recreation.gov per recommendation from the ranger. Boo and I did the Chihuahuan Desert Nature Trail and walked down to the amphitheater before leaving. That afternoon, when I checked, a ticket showed available Tuesday morning @ 0830. Yes! I logged in and ordered the ticket. Very lucky, and glad to get such an early time before the caves get “crowded”.

I got to the visitor center early to pick up my ticket, rented the audio guide, and then went down to the start of the natural entrance. A ranger gave a short orientation about requested behavior and etiquette, sadly most ignored it. Please don’t talk or if you have to, whisper, as sounds carry. Let your eyes adjust to the lights in the cave and don’t use other lights.

The tour starts at the natural entrance; I walked down a 750 foot descent over 1.25 miles. Arriving at the Big Room, there is another 1.25 mile path around the room, before getting to the elevators to take you back to the visitor center. I stopped many many times to stare at all the gorgeous “decorations” of the cave. The audio guide provided a lot of great information and I was glad I rented it. Besides learning about the cave, the history of the exploration, fossils, cave formations, cleaning of lint off the formations, I learned that the cave was “professionally lit” by a Broadway Theater Designer, there are 1200 light bulbs in the cave and it takes special training to access and change the bulbs.

There are half a dozen other ranger tours, unfortunately on hold now. I would have loved to take the King’s Palace, Left Hand Tunnel, or Lower Cave tours. Next time! The visitor center exhibits were great and I learned a lot, too. They had a 3 dimensional reproduction of the cave and visitor center, fossils, rock types and a great exhibit on rock formations. I knew about stalagmites and stalactites but I learned about popcorn, cave pearls, soda straws, draperies, and columns. There was a “make your own speleothems“, by choosing gypsum or limestone, water flow, fast or slow, and other characteristics that are involved in all these amazing shapes.

They had two short videos, the Hidden World in the theater and another film about the Native American tribes who lived here before being forced off the land onto reservations.

I went out twice to see the “bat flight”. Monday night, Memorial Day, was the first ranger talk of 2021 and the first since 2019. Unfortunately, despite a very interesting talk, the rangers emptied the amphitheater when lightning started right before sunset. I went back out Tuesday, despite chance of rain around 50% and got lucky and saw the bats. There was a different ranger there and, although I arrived after he started, it was a different talk as well. The ranger Monday night spoke about the Brazilian free-tail bats and the cave, Tuesday, when I arrived the discussion was on bat “lore”, vampire bats, bats and witches. All very interesting.

I returned to do part of the Old Guano Trail on Wednesday. It is almost 4 miles one way, starting by the Natural Entrance and going to White City. I’d have liked to do the entire trail but didn’t want to do a round-trip. This is when a travel companion, or a second car would be beneficial. We could have parked a car at each end. Dogs are allowed on this trail.

The ticket is good for 3 days so I returned the last morning I was in town. You need to enter at the same time, as they check the ticket. I was very glad for the opportunity for a second visit. My first visit, I was reading the signs, stopping at the numbered audio guide markers, and taking a ridiculous amount of photos. The second time I just walked down, looking around, looking up at the ceiling, and noticing new formations and the amazing shapes. I recommend getting first time in the morning, 0830, as it’s mostly quiet and peaceful in the caves.

A number of people do take the elevators down, so even being first group to enter the cave doesn’t ensure no crowds in the big room. Regardless, don’t miss the walk down if you’re physically able. There is a lot to see even before you get to the big room. The NPS states it’s strenuous and doesn’t recommend if you do have health issues; it is very steep but it is a nice smooth path with handrails.

Dogs are not allowed in the amphitheater during the bat flight or on most trails in the park other than the two I mentioned, the Chihuahuan Nature Trail and the Old Guano Trail.

They do offer kennels at the visitor center. The first time I visited the caverns I left Boo at the hotel but Thursday when I returned, I had checked out and so brought him with me. I didn’t need reservations, it’s first come. You do need your vet records to prove rabies vaccination. $10 for the day.