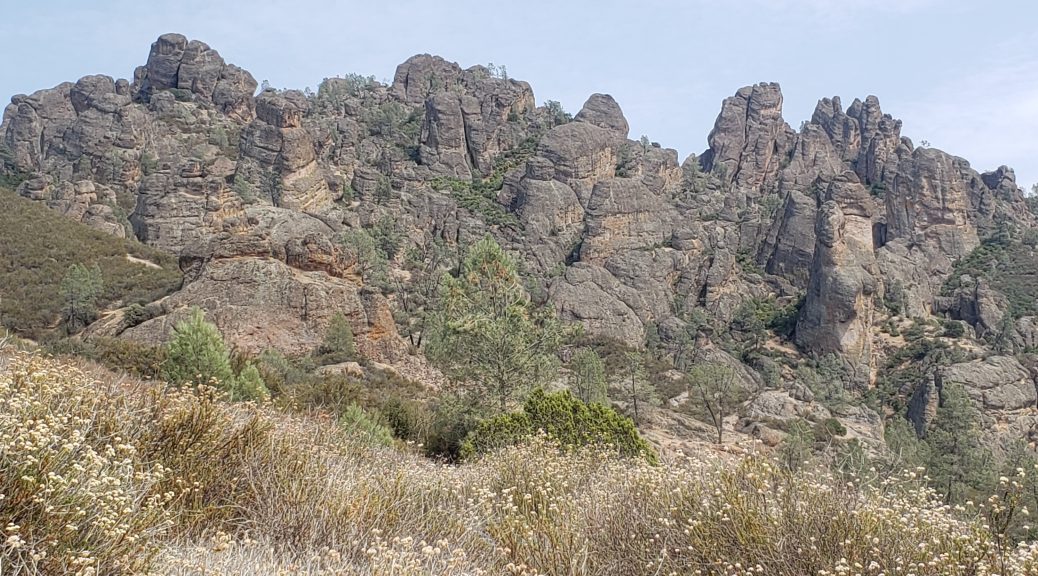 Pinnacles, in west central California, is a fairly new park. It was dedicated January 2013, although it has been a national monument since 1908.

I’ve owned the National Geographic “Guide to National Parks of the United States”, since the second edition, early 1990s, I think. Like Black Canyon of the Gunnison, in Colorado, dedicated in 1999 and Congaree, in South Carolina, dedicated 2003, none of these parks were in my old book. Time for an upgrade. I now have the eighth edition, from 2016, but they’ve added four new ones since Pinnacles, too.  Hard to keep up but glad they keep adding to our protected lands. I use the NPS.gov site, of course, for up-to-date info, closures, trails, visitor center hours but the book is a great reference, regardless.

When planning my route after Channel Islands I debated where to head next and did think about the more “famous” parks, but I have visited Yosemite, Sequoia, and Kings Canyon, previously. I saw this on the map and thought, I will head up Route 1/Pacific Coast Highway and stop at Pinnacles for a few days. Pinnacles is the site of an ancient volcano field, formed as part of the San Andreas fault that is just east of the park.

It’s a fairly small park, and easy to visit in a day or two. There are two entrances, east and west sides, but no connecting roads. There are trails going across the park so you could visit both sides with some long hikes or take about 90 minutes to drive from one entrance to another.

I visited the east side on Friday. I stopped at the visitor center hoping for some exhibits but there is just a park store; the Ranger did say they are working on a new visitor center. There are good reference signs throughout the park, however, on the geology of the park, Native Americans, early settlers, the condors and bats.

I went to the Old Pinnacles parking area. I starting the Old Pinnacles trail then headed south to pick up the Blue Oak Trail to the viewpoint on Hawkins Peak where it heads down the hill on the Condor Gulch Trail. Beautiful views! After I got back in the car, I drove over to the Bear Gulch parking area to do the Moses Spring Trail and Rim Trail. I loved this trail. I thought I was going clockwise but after a long climb I came to the Bear Gulch Reservoir and realized I had gone counterclockwise. I headed down to finish the Rim Trail to Moses Spring Trail then back to the parking lot. The Bear Gulch Cave is currently closed for bat breeding. The trail is about 2.2 miles. Monday, I went back to the park, through the west entrance. Be aware that most of California 146 is a winding single lane road. It’s twelve miles off 101 from Soledad.  There is enough room to pass another car, just hope they aren’t coming too fast towards you!

After talking with the ranger at the entrance station, I drove to the Chaparral parking area to do the Balconies Trail. The ranger recommended walking this clockwise. This is another great trail, like the Rim Trail. It’s a good steady climb then you go through the talus cave. Make sure to pack a flashlight! I used my phone, despite having a nice bright headlamp in my car. It was a lot of fun climbing up over the huge boulders in the “cave”.  The complete trail is 2.4 miles. I drove back to the visitor center and did the short 1 mile, Prewett Point Trail. A very easy trail with some beautiful views over the park and Lopez Canyon.

I met a family coming from the cave in Balconies who had started at the Old Pinnacles parking area. They did the Blue Oak Trail, Tunnel Trail, and Juniper Canyon Trail to get to the start of the Balconies Trail and were continuing back to their car via the West Fork Chalone Creek trail. That would be a long hike but allow you to see both sides of the park “easily” without a lot of driving.

The west side is day use only but there is a campground on the east side. This is a beautiful little park, with about 30 miles of trail overall. The talus caves are a lot of fun and I recommended stopping for a day or two if you have the time. Pinnacles is a high desert and temperatures are much higher inside the park than outside. Pets are not allowed on any trails. If you’re lucky, you’ll be able to see some condors. I did see three circling on the east side of the park when hiking the Rim Trail.