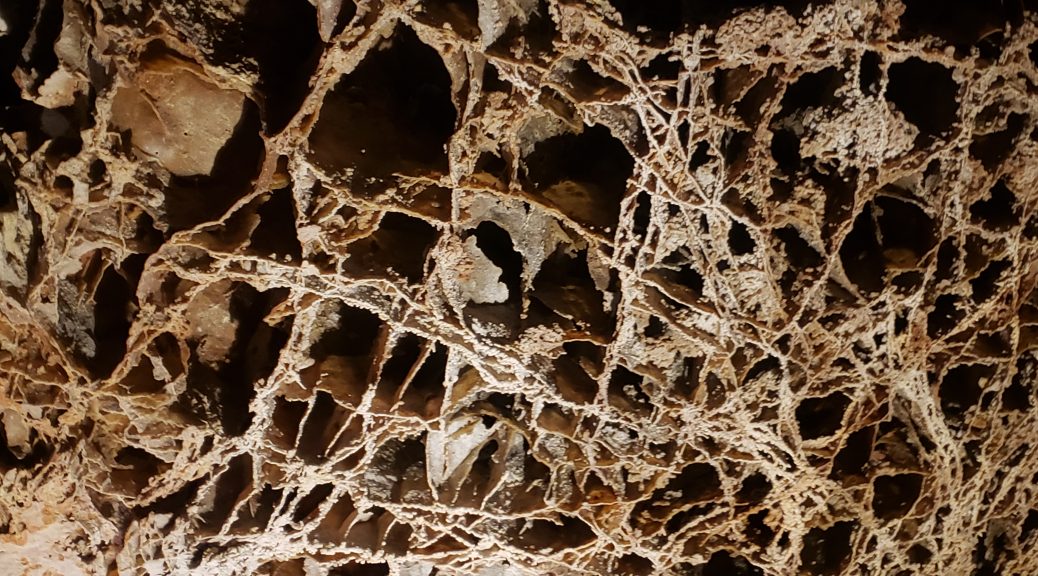 I’ve never been to this park and definitely wanted to visit while in the area. I like visiting caves. My daughter has mentioned to me she thinks all caves are alike but even she thought Wind Cave is unique.

Wind Cave, the 3rd largest cave system in the US and the the 8th largest in the world, contains 95% of the world’s box works formations. Box work is a rare cave formation; it is formed when dissolved calcium carbonate crystallized in cracks in surrounding rock. The surrounding rock then erodes away and leaves the boxlike calcite crystals. Wind Cave doesn’t charge an entry fee but they do charge per ranger guided cave tour. Unlike Carlsbad Caverns or Mammoth, there is no online reservation system, they are first-come, first-served. Line up at the visitor center.

There are some discounts, if you have the Senior or Access pass, but the other agency passes are not accepted. The two tours I took, Natural Entrance Tour and Fairgrounds Tour were $12 each. These fees stay with the park and pay for maintenance and salaries of rangers. The tours take different routes throughout the mapped parts of the cave, currently 157 miles. They believe this is only 5-10% of the cave based on wind volume. An average of 7 new miles of cave are surveyed each year. Wind Cave gets its name because it’s a “barometric” cave. Depending on the pressure outside of the cave, air is pulled in or out of the cave. Adding entrances to the cave caused freezing, thaws, and then rock falls. These caused additional pressure changes which had environmental impacts to the cave. They had to install air locks at the “natural” entrance and by the elevators, as well, to protect the cave and allow the elevators to work properly.

I finished the Fairgrounds Tour and was one of the last groups waiting to go up in the elevator. Another ranger with her tour came through the pressure doors. The elevator, which we thought had gone up, opened with Ranger Kyle and the 10 passengers. It couldn’t rise the 209 feet because the open door to the cave was causing too much high pressure. Kyle stuck his head out and said “close the door”! With the pressure door slammed shut, the elevator was able to climb to the entrance. Very interesting!

I ran into two bison jams, one as I was entering heading to the visitor center in the morning, one later in the afternoon. I also stopped by to see the Prairie Dog town. I wasn’t able to take the drive through the park as US87 was closed.

The visitor center, and the tours, have information about Alvin McDonald, one of the early explorers of the cave who mapped many of the passages. The visitor center also had exhibits about the local Native Americans and the Lakota Emergence Story; the Lakota believe people emerged from the spirit world to the surface through the passageway, Maka Oniye, or “breathing earth”. I recommend planning some time for the visitor center and the park video. There are some other interesting videos online.

There are two very short trails close to the visitor center but, despite the beauty of the area, I didn’t spend any time above ground, since I had planned to visit Custer State Park.