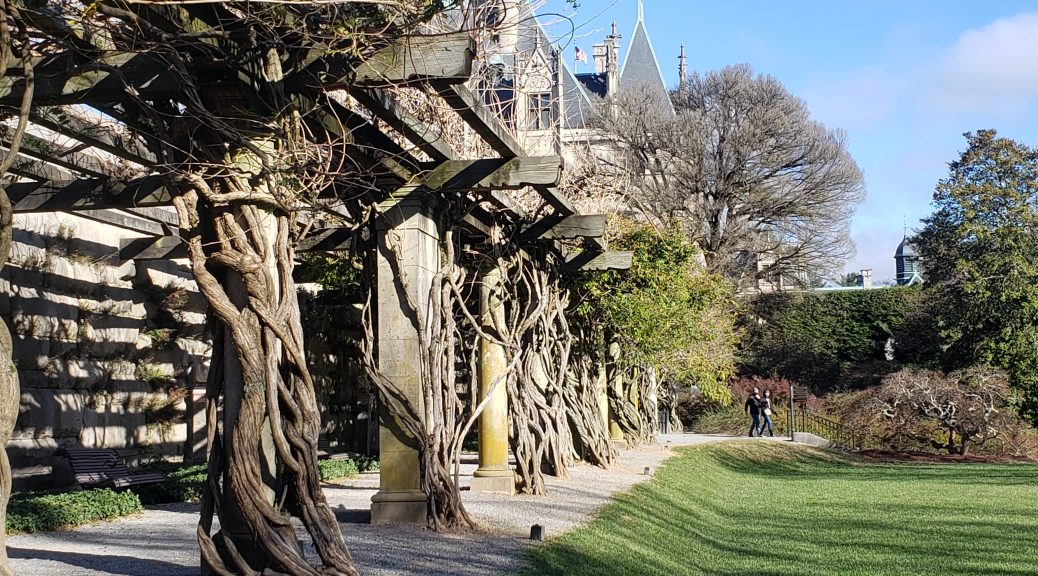 Like in the Finger Lakes, there is much to do in the Asheville area. Asheville has a great arts district and many galleries downtown, nice city parks and trails, great historic buildings, and many wonderful restaurants and breweries. I really enjoyed my time here.

The city can keep you busy but if you get bored, you can head to the Great Smoky Mountains National Park, the Pisgah National Forest, or take a long drive on the Blue Ridge Parkway. There are numerous small towns to explore.

I was here from the middle of November to the middle of December so the weather was quite varied. I had some days in the 60s, even some in the 70s early in my stay. But many mornings were mid-20s or mid-30s, only warming to the 40s or 50s by afternoon, so I wore layers everywhere.

The Biltmore House is a major attraction in the area. They have Candlelight Christmas Tours from early November through early January. I scheduled a visit on my birthday and made reservations at the Stable Cafe for dinner before the tour. The house and grounds are lit up beautifully. Besides the huge tree on the front lawn and lights trimming the buildings, decorations in the house include “55 elaborate hand-decorated trees including the 35-ft. live Fraser fir in the Banquet Hall, a thousand poinsettias, miles of garland, and live music. Throughout the estate, find 100+ decorated trees with 25,000+ ornaments, 1.5 miles of fresh garlands, 500 wreaths and sprays, 2,000 poinsettias and other favorite holiday plants, and 100 kissing balls.”

I thought I’d go out a little early and enjoy the grounds before my dinner reservations but it takes quite a while to drive through the grounds and I had to stop for my tickets at will-call so arrived just in time for dinner at 1900 then went directly to my tour at 2030.

I purchased the enhanced tour so had the audio guide. I spent over an hour inside the building enjoying the rooms and furnishings and all the decorations. Gorgeous. I saw more of the building than I expected, going up and down the stairs several times following the tour instructions and even visiting the servants quarters, big kitchens and the “Halloween Room” in the basement.

If you arrive after 1630 on the day of your tour, you can return the following day. So I returned early the next day, Monday, to see the grounds. I thought perhaps a weekday would be less busy. But they are limiting the amount of people for entry regardless.

I visited the Italian, Walled, and Azelea gardens, which are obviously not at their peak, and the conservatory which is full of flowers like orchids and poinsettias. It was a lovely day and Boo joined me for most of it; he enjoyed the trails to the Bass Pond and boat house. We saw the waterfall, did part of the Deer Park trail to the lagoon, and came back to the house over the Woodland Trail. Later we visited Antler Hill Village where I had a late lunch at Cedric’s Tavern and had my free tasting, included with admission, at their winery.

I was staying in a great AirBNB in West Asheville but spent many days downtown, walking around, just enjoying the city, the architecture, admiring the great facades of the old buildings, window shopping. It’s a great walking city. I recommend walking the Urban Trail through downtown. I went into Grove Arcade, Woolworth Walk, and the Battery Park Book Exchange and Champagne Bar for short visits. I wanted to visit Basilica of Saint Lawrence but they weren’t allowing visitors or even having mass because of COVID19. The church was designed by Rafael Guastavino and I would have loved to see inside, the altar, and especially his free-standing dome.

I had to drive downtown when I wanted to visit but there was a lot to do close to my rental. I was in walking distance of some good restaurants, Pizza Mind, Taco Billy, several bakery’s, coffee shops, Archetype and Wedge breweries, and the local cider company, Urban Orchard.

There are other great outdoor activities like the Botanical Gardens or the gardens and trails at the North Carolina Arboretum. I visited one day to see the gardens, bonsai exhibit and we did a few trails but would love to see it in the spring, summer or early fall. I am sure it’s gorgeous.

I’ve taken a few cooking classes when traveling but found this fun and interesting foraging tour with No Taste Like Home. We gathered some hawkweed, onion grass, lot of mushrooms, and a number of other items; we learned so much from our guides. We had a perfect, sunny afternoon walking through the woods. Quite a unique experience. The tour includes sampling some of our food on site, for example, trying some pine needles, sassafras root, and spice bush. The cost also includes being able to take your forage to several area restaurants where they will make you a free appetizer with purchase of a meal. I checked the menus and selected The Market Place, dropping off my mushrooms and other items on the way home for my reservation the next evening. Beside the great mushroom appetizer I had the delicious lamb pasta.

I drove part of the Blue Ridge Parkway one day when I had clear skies. I started at the Folk Art Center to see their galleries of Appalachian crafts before continuing north. We stopped at many of the overlooks and did a few trails before ending at Mount Mitchell State Park, the highest peak east of the Mississippi. There is a great observation tour with 360 degree views of the Appalachians. I tried to drive south the following week but most of the parkway had been closed because of snow, I was only able to drive about 10 miles or so. I tried again a week or so later but most of the road was still closed, you can check real time conditions on the NPS site.

Another day I drove to the Great Smoky Mountains National Park, just an hour west of Asheville. November and December aren’t the best months to visit the park. I picked a day that was going to be high in the low 50s but it was several days after a snow and some of the roads were still closed. I did the riverside hike to the Cherokee Reservation and toured the farm at the southern visitor center, Oconaluftee, before driving to Clingman’s Dome.

Besides the Candlelight Tour at Biltmore, I did a few other holiday events. The Dillsboro Lights & Luminaries runs the first two weekends of December. Adapted from a Scandinavian custom of lighting the way for the Christ child, more than 2,500 candles in white bags line the streets with more than a dozen shops, galleries, and artist studios open late to explore.

I drove over the first Saturday in December after stopping for a few hours in the early afternoon at Sylva. Sylva is a lovely small town. The former Jackson County Courthouse, now a library, sits on a hill and is the most photographed building in Jackson County. There were decorations everywhere, an art fair down the street, and windows of all the stores were decorated for the holidays. I stopped in Innovation Brewing to try a cherry sour late afternoon before continuing to Dillsboro. I ordered a great brisket from Haywood Smokehouse then ate at the Dillsboro Innovation Station. I sat outside with Boo, while waiting for the sun to set. We wandered the area for about an hour looking at all the beautiful lights. Santa and Mrs. Claus were available to meet kids (socially distant on their sleigh).

I also went to the Winter Lights show at the North Carolina Arboretum. Explore Asheville is a great site and one I used frequently to find activities and recommendations.