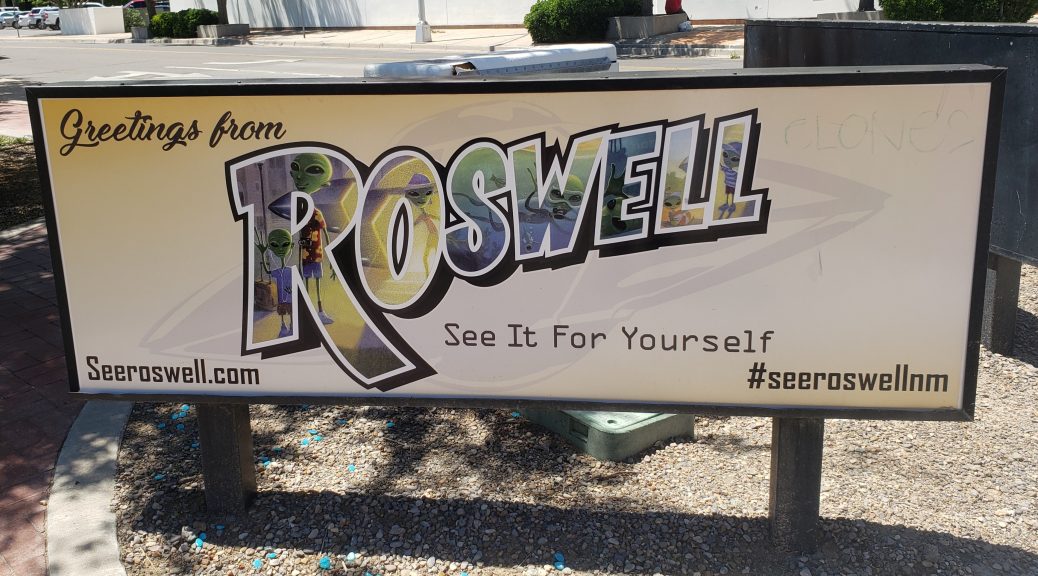 Or is it? I don’t know but thought it would be fun to stop for a day when driving from Carlsbad to Santa Fe. I am a huge science fiction nerd, growing up watching the original Star Trek and reading Asimov and Heinlein and Clarke. I never did watch X-files. I might need to find that on streaming and start watching it.

I did pull up the “Little Green Men” episode of Star Trek Deep Space 9 on Netflix as “research” since it’s about the Roswell incident. One of my favorite episodes, too. I didn’t do much the first day in town but walk around the “historic downtown”, window shopping and checking out the attractions. We arrived mid-afternoon after spending another morning at Carlsbad Caverns. I stopped by the visitor center for a map and guidebook. They take their aliens “seriously”; these little green men are in almost every window or storefront. Aliens like our pizza, tacos, donuts, wear sombreros and t-shirts, and seem to follow COVID19 protocols. Or perhaps they always mask up, worried about all human diseases. We stopped for a number of photos. Like in Hershey, Pennsylvania, with their streetlights shaped like chocolate kisses, Roswell has special streetlights to go with the theme of the city, very cute!

The next day I was going to spend the morning at the UFO Museum. I arrived a little after 0900 when it first opened, paid, and entered but there was a huge crowd with more coming in. Way too many people for the small space. I asked to return later, and they said that was fine.

I went over to check out the Roswell Spacewalk and Spaceport Roswell just around the corner from the museum; despite both supposedly open by 0900 they had locked doors and closed signs in the windows. On the way back to my hotel I stopped at the visitor center to ask about their hours. One of the employees told me their hours had changed and they opened at 1000.

I went back to the Spaceport around 1100 and took the Roswell 1947 “journey”. It was my first virtual reality experience. I thought the animation a little old fashioned, like a 1990s game on an old PC but still enjoyed it. I told the employee it was fun and he said how much he liked the Apollo 11 mission. He said much of the animation was based on real photographs of the NASA mission. I thought it sound interesting and decided to return for that later in the afternoon.

I went back to the UFO museum after my first Spaceport journey and spent a couple hours here reading the exhibits and listening to audio recordings from locals and the military who first visited the crash site. There were affidavits from witnesses and some historical information and documents on the Roswell “incident” of 1947. There was a section on UFO and alien references in books, movies, and TV, possible ancient UFO artifacts like the Nazca lines and Mayan grave decorations with a video from the history channel playing, and stories on various encounters of the first, second, third, and fourth “kinds”, from just lights in the skies to abductions. Two hours is plenty of time for a visit.

Late afternoon, I returned to the Spaceport for the Apollo 11 journey. This VR was very good, you follow the astronauts into the rocket, launch, and landing on the moon. After returning from the moon I went across the street to the Spacewalk, a black light maze with lots of aliens, some from Star Trek. Silly, cheesy, but fun, like all of Roswell.

There are plenty of great non-alien activities, too. I was planning on visiting one or more of the Anderson Museum of Contemporary Art, the Historical Society of SE New Mexico, both free, or the Roswell Museum & Art Center. This includes the Goddard Planetarium which sounds great but is still closed because of COVID19. I didn’t do any, lacking motivation, but did stop by the Gallery/Main Street Arts. There are some very talented artists in the area.

There are several state parks close by but with all my visits to the national parks, didn’t feel like the effort, either. But I do think a couple or family could enjoy a week here, making the requisite UFO-theme visits, a visit to Bitter Lake or Bottomless Lakes State Parks, there are golf courses, and plenty of museums.

I picked up some good Pad Thai from Lemongrass Thai (my local Thai restaurant is much better) for lunch and some excellent enmoladas de pollo enchiladas from Antigua Cochina Mexicana for dinner. I usually leave the sides of rice and beans in many Mexican restaurants as they are bland rice and runny refried beans, but the black beans and roasted corn rice were way above standard as well. Delicious meal.