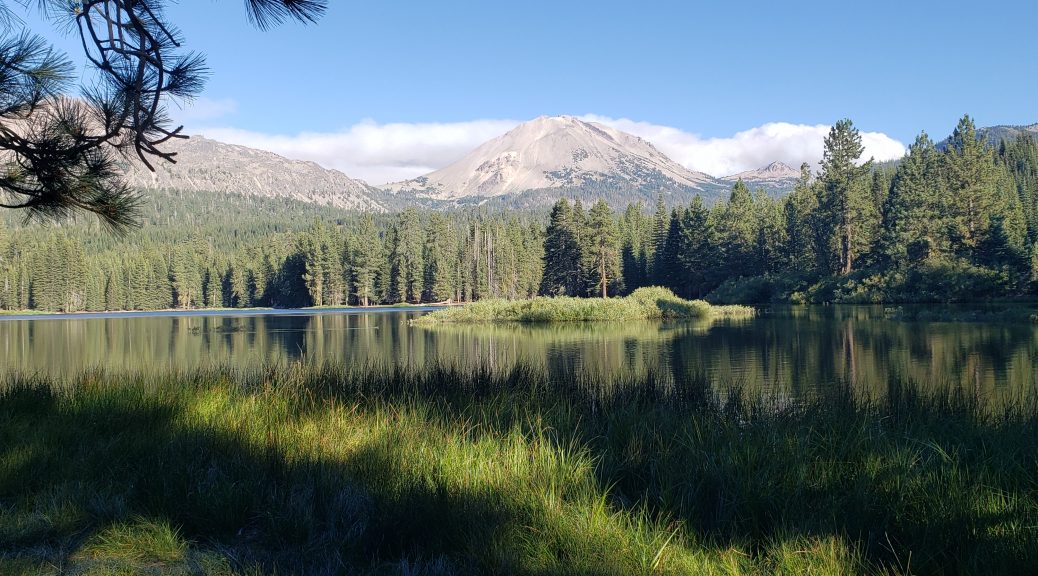 Like Pinnacles, I hadn’t heard of this park, either. I read about it on my daughter’s blog. Unlike Black Canyon of the Gunnison and Pinnacles, however, Lassen Volcanic National Park is not a “new” park, it was established in 1916 under President Wilson after Teddy Roosevelt made it a national monument in 1907.

I did check the active fires in the area before booking here or Bend, Oregon. Crazy. I’ve never thought about doing this before, but every time I listened to the news the past several months I heard about the fires in California and Oregon and Washington. The Dixie fire was burning southeast of the park and there were mandatory evacuations in some towns. It was rather worrying to get those “Emergency Alerts” on my phone, especially before I knew where they were evacuating. The southeast areas of the park were closed, Warner Valley and Juniper Lake, and there was no camping in the backcountry but I am glad for the opportunity to see what I could of this beautiful park.

I left Eureka Monday the 2nd to drive to Redding. Not able to check-in to my hotel until 1500, I drove directly to the park, arriving around 1330. We entered off 44, at the Manzanita Lake Area. Our first stop was the Devastated Area. Dogs are not allowed on any trails in this park but can be in the parking lots, sidewalks, and paved areas so I got Boo out and walked him around after our drive. Like most of the parks, there are plenty of information markers everywhere and the two here were about the 1915 explosions on May 19 and May 22. Note that a dog saved the day, but his human, Elmer Sorahan, gets the credit for warning everyone else.

I put Boo back in the car so I could do the short 1/2 mile interpretative trail. There are markers, with audio, all along this trail, about the explosions, different types of rocks from the volcano, and the effects on the forest.

Continuing our drive on the Lassen Volcanic National Park Highway (route 89 through the park), we stopped at Summit Lake South. I walked Boo through the campground then walked along the lake. I went to the Bumpass Trailhead for the views and saw some of the earthquake monitoring equipment they have throughout the park.

We also stopped at the Sulphur Works area to see the mud pots and fumaroles along the road. I ended my day at the Kohm Yah-mah-nee Visitor Center. Kohm Yah-mah-nee means “Snow Mountain” in the Mountain Maidu language, one of the local tribes. Unfortunately, it was just a few minutes before they were closing, so I just did the geological walk around the outside of the center. I saw on their outside board there was going to be a ranger talk at 1730 so hung around and Jared gave a great talk about the black bears in the park. The next morning, I made it to the park by 10, starting at Kohm Yah-mah-nee to see the exhibits and the great 20 minute park film. They had lots of exhibits about volcanoes. I didn’t know there were four kinds of volcanoes until reading my daughter’s post. But learned a lot more about them at the visitor center and that all four types are present in the park. I also learned Lassen Peak is one of the largest plug dome volcanoes in the world. I stopped at Emerald Lake and hiked around the lake; I’m not totally sure there was an official trail around the north side but I followed a well-trodden path and then had to do some scrambling over rocks before making it back to the road. I returned to the Bumpass Trailhead to do the 2.6 mile walk to Bumpass Hell. There is a boardwalk through the hydrothermal area. I learned about the explorer Bumpass (didn’t realize it was a person’s name prior to this) and his personal “hell”. What a horrible injury. Stay on trail! When returning, I crossed the street and went to visit Lake Helen instead of following the path back to the parking lot. I stopped at Kings Creek Picnic Area and did the walk to Cold Boiling Lake. This is beautiful walk through the woods. This path leads to other trails, including back to Bumpass Hell, Twin Meadows, and Conrad Meadows. I would have liked to continue to Crumbaugh Lake but the trail was not well marked nor the intersections to the other trails and I wasn’t quite sure where to go after arriving at the lake.

I made a quick stop to see the “Hot Rock” but there were dozens of people around the marker and rock so I finished the day at the Manzanita Lake Area.

I visited the Loomis Museum. There are a lot of interesting exhibits here, about earthquakes, the seismic monitoring in the park, local tribes, and more. I walked the Lily Pond Interpretive Trail (trail guides are 50 cents and are very informative about all the flora) then continued the path around Reflective Lake. I attended another ranger talk on conifers and alpine zones outside the visitor center. I finished the day with the beautiful walk, 1.5 miles, around Manzanita Lake. The views are absolutely incredible. The next day I returned to the park in the afternoon. I was going to see sites in Redding instead of coming to the park for a third day, but there was not really much I wanted to see. So after visiting the Sundial Bridge and a walk along the Sacramento River with Boo, I drove out to the park. Another bonus, it is also 20-25 degrees cooler than Redding.

I entered at the northwest entrance again; stopping at Chaos Crags and Chaos Jumbles, then Hot Rock. It was totally empty and there were a herd of deer wandering among the rocks, so I left Boo in the car to not scare them away. I stopped at Summit Lake North and had a nice walk through the campsites and along the lake, then headed back north on 89. I stopped at the Devastated Area and did the trail again. The Dixie Fire made the sky even worse than the day before, giving the southern part of the park an eerie reddish gray color sky and covering the sun. It made for some great photos though. I was going to attend another ranger talk at 1730 but had an hour+ so decided to drive out to see the Subway Cave Lava Tubes.  Just 13 miles east of the park on 44 this was a fun little detour. I made it back to the park for the ranger talk but, unfortunately, it was a ranger walk and since Boo wasn’t allowed on the trail I just drove back to Redding. Lassen Volcanic Park gets about 500,000 visitors a year. It deserves much more but glad it’s a “hidden gem” among the the national parks without the millions of visitors at Great Smokey, Yellowstone or Zion. Thrilled I got to visit and the park wasn’t closed. If I return, I would like to visit the Butte Lake, Warner Valley, and Juniper Lakes areas, all accessed from other roads outside the park.

The day I left Redding for Oregon, August 5th, I was checking some information on their website and saw that the entire park was now closed because of the fire.