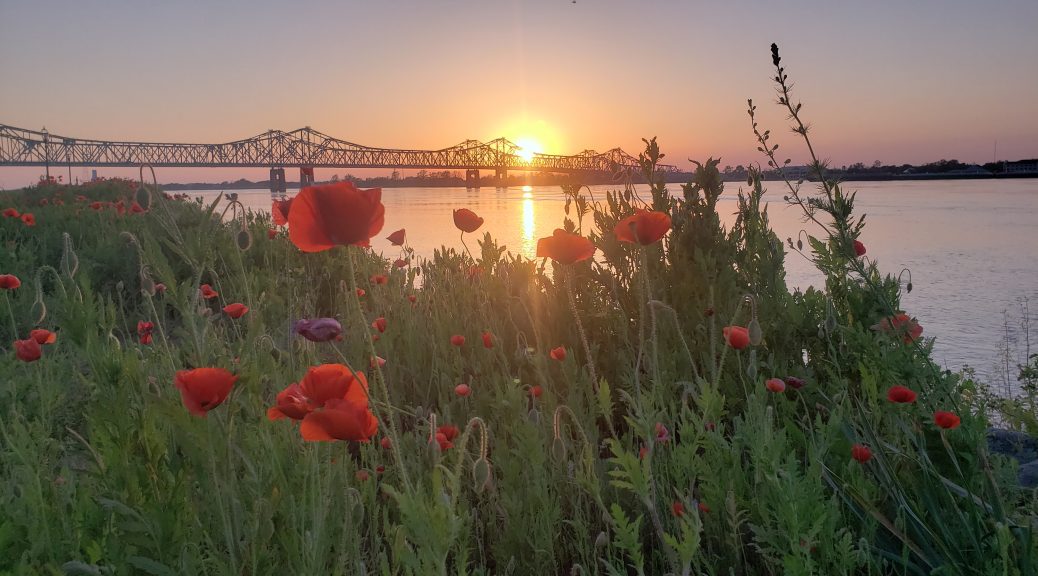 After leaving Vicksburg I thought it would be fun to travel part of the Natchez Trace Parkway and then spend a few days in Natchez. From Vicksburg, I drove east towards Jackson to get on the the parkway. The parkway extends about 440 miles from Nashville to Natchez, but I only drove about 90 miles of the trace. I want to visit a friend in Nashville next year, maybe I will try to pick it back up in Jackson and head north for the remaining 300 miles.

I took most of the afternoon. I made stops at Owens Creek, with a small waterfall, Mount Locust Inn, displays on the Old Trace, the wilderness trail, and the ruins of the Elizabeth Female Academy, the first institution for women in Mississippi. I stopped at the visitor Center on Canal Street to pick up a guide book and map, it was just a few blocks from my AirBNB. I met my tour guide, Sally, with Open Air Tours Natchez here the day after I arrived. It was a great overview of the city. I also booked my house tours at the visitor center and they have some exhibits on the city history.

Bluff Park A beautiful area along the riverfront, one of the Natchez walking tours follows the bluffs. There is a lot to see here, some historic houses, a gazebo, fountain, and historical markers.

Bridge of Sighs Definitely nothing like the Ponte dei Sospiri in Venice! Still, the bridge makes it convenient to continue your walk along along the river as it connects two parts of the bluff. There are nice views from the bridge. Designed by Samuel Sloan for the Nutt family, the octagonal Oriental Villa began in 1860 but was delayed due to lack of resources because of the start of the Civil War. In addition, many of their furnishings were being shipped from Europe and Union blockades prevented their arrival. They only finished the lowest level but the Nutt family stayed in the home until the 20th c. There is a small family cemetery on the property. No photos allowed downstairs on the main level where there are multiple rooms around a central rotunda. This is really an amazing house and, even unfinished, it was still quite beautiful.

Stanton Hall Originally called Belfast, the house was built for Frederick Stanton from Ireland. It was designed by Thomas Rose and finished in 1859. No pictures were allowed inside of the gorgeous furnishings, carved lintels over the doors, crown moldings, or 17 foot ceilings. I would have loved to get pictures of the hand carved wood throughout the house. Stanton died just a few months after completion of the house but his wife and children stayed in the home until 1894. It was used as the Stanton College for Young Ladies until it was purchased by the Pilgrimage Garden Club in 1938.

Auburn Museum and Historic House Completed in 1812, designed by Levi Weeks for Lyman Harding, the first attorney general of Mississippi. It became the home of Stephen Duncan in 1820 and remained in their family until 1911 when it was donated with 210 acres to the city. There are several outbuildings, including a separate room for billiards, what the guide called, an “antebellum man cave”, the two-story kitchen and enslaved quarters, a dairy, and barn. The kitchen and enslaved quarters are part of the tour. Beautiful home and grounds.

Downtown Karla Brown Ghost Tour Fun tour with Scott, we visited the old city jail, courthouse, the former Prentiss Club, Eola Hotel, King’s Tavern and much more. At the Eola Hotel, we “communicated” with the spirits when they turned on flashlights for us! King’s Tavern, the oldest building in Natchez, has an interesting history; the third floor room is supposedly where one of the Harpe brothers murdered a crying infant for keeping him awake. The story Scott told us is slightly different than the blog entry I found when looking up the Harpe’s, but either way, horrible story. Natchez Trails and Walking Tours There are signs on Natchez history all over town. I walked all the trails during my stay. The St. Catherine’s trail is missing a number of markers and it’s on a busier street so is a slightly less enjoyable walk than the others. I walked the north and south trails my last day. I had seen many of the informative markers on other walks during the week but walking both on the correct paths I saw the remaining markers and some blocks of downtown I hadn’t seen before. The bluff and nature trails provide beautiful views of the river. I started the north and south trails at the pavilion; the maps there are better than the one online (above) and do vary slightly from the markers on the street but all the trails are easy to follow, regardless. Grand Village of the Natchez A visit to the mounds of the Grand Village is a must if in Natchez. The museum features artifacts from the site and great information about the Natchez history. There are three mounds remaining, including the Great Sun’s mound, home to the leader’s house, and the Temple Mound, where the temple was built. Documentation and drawings show the temple roof topped with large wooden birds. Only the Great Sun and nobles were allowed on the Temple Mound. The large plaza between the two mounds was used for religious and social activities.

Forks of the Road Slave Market This is the site of the one of the largest slave markets in the south. There are historical markers at the location documenting its ugly history. Slave auctions used to take place on the riverfront, Natchez Under-the-Hill, before moving to the downtown area. A law banned the auctions in 1833. They moved the market to an open area outside of town at the intersection of three roads. Similar to Charleston, when they decided selling humans on street corners looked bad. They banned “public sales” in 1856 and moved the market indoors.

Emerald Mound One of the largest mounds in the US, the site covers 8 acres. The site was built and used during the Mississippian period from 1250 to 1600 A.D. It was a ceremonial center for the local population and later abandoned by about 1600, when the Natchez established their capital at the Grand Village. I made a short visit to climb the mounds and read the exhibits on the way back from visiting Windsor Ruins.

Saint Mary’s Basilica I was so glad the church was open for a visit. The nave and windows are beautiful.

Memorial Park The park was used to bury confederate soldiers before disinterring them and burying them at the City Cemetery. It does contain a grave for a revolutionary soldier and monuments to the five branches of the military.

Natchez Under-the-Hill Love the name, very Hobbit-like. This was formerly a separate city, “Natchez improper”, “without a single exception the most licentious spot that I ever saw. It is inhabited by the worst characters and it is well known that not a virtuous female will ride in this polluted spot. From this filthy spot emanate all the contagious disorders that infest the town above.” Down Silver Street, it is now cleaned up and provides a great view of the river, the bridges, and has The Camp Restaurant and Magnolia Grill. The start of the Natchez Nature Trail is down Silver Street. /Natchez National Cemetery The city cemetery has some interesting grave markers, Jewish and Catholic areas, a Avenue of the Generals, and the Turning Angel memorial. This marker is for the employees for the Natchez Drug Company, killed during an explosion in 1908, that destroyed the 5 story building. The monument is now referred to as ‘The Turning Angel’ because at night when cars drive by on Cemetery Road their headlights shine upon the monument and to some it appears to turn as their car passes by.

I really enjoyed just walking around town and looking at all the beautiful buildings. Whether you follow one of the marked trails or just wander up and down the streets, there is a lot to see. There is the old Jewish synagogue, Temple B’Nai Israel, the old Courthouse, old jail, Texada, the old tavern that was used as the first Capitol, King’s Tavern, Prentiss Club, Magnolia Hall, Greenlea, and much more.

Port Gibson While I should have stopped here on my drive down from Vicksburg, it was still an enjoyable day driving up to see the Windsor Ruins. The home of Smith Coffee Daniell, it was started in 1859 and complete in 1861. It was destroyed by fire in 1890. Twenty-three of the twenty-nine columns from the home, along with some amazing metal Corinthian capitals remain. The site is fenced off as the columns are falling apart. Had the pig in a poncho one afternoon. I returned a few days later and had a great slow burn burger. They have a good selection of craft beer. They have two lovely patios, one street level and one on the second story, up an outside stairwell so you can take your dog up and enjoy the view of the river and bridges.

Magnolia Grill  Highly recommend their BBQ Shrimp.  Sitting on the patio I had a great view of the river. No pets.

Farrah’s In the courtyard of the Guest House. I had a Sunday breakfast there, a selection of 4 items and a drink for $10. The eggs and bacon were good but surprised they served hash browns like McDonald’s. I certainly expected some fresh potatoes in a quality restaurant like this.

Pig Out Inn Despite the silly name, great BBQ. I had a chopped brisket sandwich and side of slaw. They give you a warmed bottle of BBQ sauce that really makes the sandwich great.

Natchez Brewing Outside seating, dog friendly. Didn’t try their pizza but saw a lot of people coming for take out and leaving with stacks of pizza boxes. Their beer was very good and good service, too.

Old South Winery Had a tasting for $5. Enjoyed most of the wines; not too sweet, not too dry. “The best in everything Muscadine”.

Mammy’s Cupboard I just wanted to see the building but ended up ordering a piece of pie to go. Their icebox lemon pie was delicious!

Bakery Cottage The bakery is closing permanently, unfortunately, not due to COVID but just other jobs according to the son/grandson who was working the counter. Mom was going back to teaching full time and grandma just tired of the long hours. I tried their delicious lemon cupcakes and chocolate chip cookies the last week they were open.

I tried Fat Mama’s Tamales and Biscuits & Blues; both were on multiple lists for restaurants in Natchez. But the tamales and the muffuletta I had were very bland and I certainly wasn’t impressed with either restaurant.